IN CONVERSATION:
ANDA ROWLAND AND JO HAMBRO ON TAKING BESPOKE BEYOND SAVILE ROW 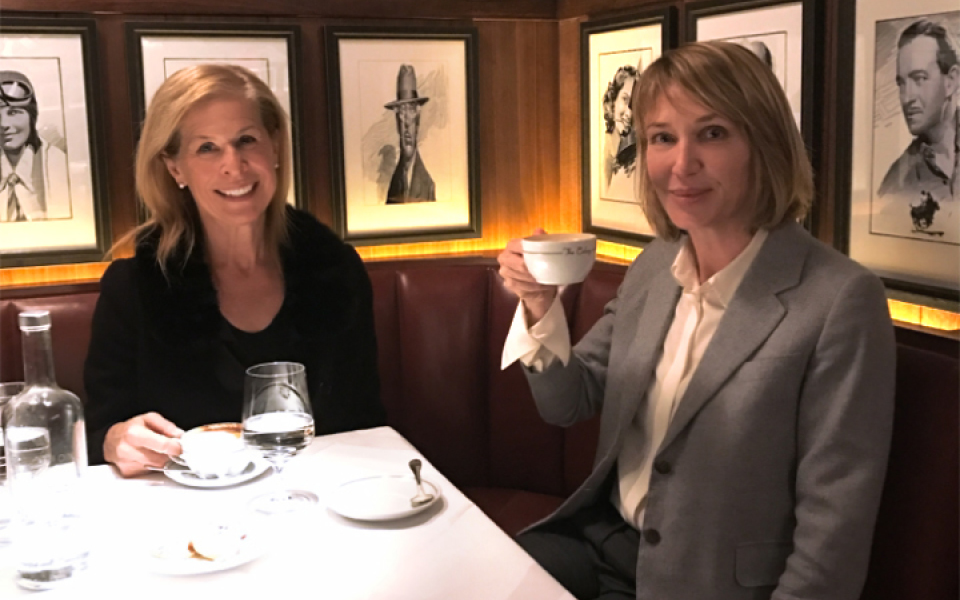 When Anderson & Sheppard Vice Chairman Anda Rowland met creative consultant Jo Hambro at the opening of the Anderson & Sheppard Haberdashery in 2012, a partnership was born and the journey to the first English Gentleman presentation began. From the Cabinet War Rooms to Lord’s Pavilion the English Gentlemen presentations pushed the boundaries for a series of exhibitions in an ode to British menswear. Here, Anda and Jo discuss how their series of bespoke menswear exhibitions came about in some unlikely locations.

Anda: The first show we did was for the inaugural LC:M (now London Fashion Week Men’s). The organisers wanted to highlight London as the home of menswear and so wanted a Savile Row presence and asked the Bespoke Association to pull something together. Many previous Association events had been organised through Anderson & Sheppard so they came to us and asked for ideas. Then I met you, Jo, and after three minutes I got a feeling that you were someone who would be perfect for this. Another person might have tried to over-style it, but you obviously had a different approach because you knew the people, the brands and the bespoke world.

Jo: I had been working with Savile Row and Jermyn Street for 25 years. I felt it should be a traditional show because Savile Row in not about fashion trends. I also think Savile Row is the DNA of menswear and we should own it and celebrate it and gently blow our own trumpet.

Anda: And look at the classics that everyone derives from rather than trying to be fashion and be something we’re not.

Jo: London is the centre of menswear and that’s something I feel very passionate about. I’ve always supported the shirt makers, the tailors, the shoemakers, the tie makers, and so I suggested doing a presentation as a collective and taking over a place like Spencer House in order to create tableaus. Viewers could walk into the breakfast room, for instance, and there would be a group of guys in their tweeds all ready to go hunting and shooting –

Jo: Exactly! So you’re literally stepping into their world.

Anda: It was an excellent idea so I contacted Spencer House and presented the idea to them. Like any of the venues it took a while to convince them but they liked the idea of it being a collective show. The main problem was that we had two months over Christmas to organise everything.

Jo: So we had to literally organise people that we knew, friends and their sons and a few professional models. Sixty guys altogether. People were surprised. The men weren’t there posing – it was actually happening, which people loved.

Anda: It was a massive undertaking but thankfully we’d done quite a few group things with the tailors, shirtmakers and shoemakers in the past so there was a trust. From there though, it took on a life of its own. Because after that one was popular – we had the Daily Mail taking pictures of a lovely group of gorgeous young men and commenting on the ‘Downton Abbey effect’- we became under pressure to do another one in summer six months later.

Jo: It was difficult to imagine topping Spencer House but I thought of Lord’s and I thought of the Long Room in the Pavilion. Now, unless you’re a member of the MCC you’re not allowed into these rooms so to be able to take 100 models in was unheard of.

Anda: Your idea was ideal – to show the pillars of British menswear that have influenced the world. So the first exhibition at Spencer House was the traditional – let’s say aristocracy – and the garments that they developed like the dinner jack­et and things that then have been moved on into the wider field. And the second one was sportswear because obviously all of it has had a wide effect. We thought it best to start with cricket and a venue that most people would not have gone into and wouldn’t necessarily have a chance to go into –

Jo: Because nobody could go into the Long Room, the Committee Room where the laws of cricket were made. It was a privilege to be allowed the opportunity to unlock doors for people in this instance.

Anda: Everybody liked it because it was, again, a complete world and the production was beautifully done. The people we wanted to reach were touched by it.

Jo: For the third exhibition I wanted to do the Cabinet War Rooms because that period of history fascinated me. It was a great winter story and it was rather special.

Anda: And, of course, that one probably had the most number of pre-event meetings because we wanted to put models in among the national archive pieces.

Jo: We wanted it to be like a film – animated so that the viewer could imagine the models in that moment in time. We actually gave them all scripts so they were literally pointing at the maps –

Anda: And the whiskey helped!

Jo: Yes, the whiskey did help!

Anda: For this one we decided that because Churchill is such an icon we needed gravitas so we drafted in some heavyweight players.

Jo: We asked Sir Michael Gambon, Kenneth Cranham, Sir John Standing, AA Gill, David Furnish to join and model in the exhibition. They all knew one another – it was really fun. A highlight was when Lord and Lady Heseltine arrived. This presentation was four months of hard work and we had 84 men in this one, all in bespoke pieces.

Anda: Yes, because of course by that point the expectations were high and all the materials we had to produce required a lot more permissions. Following that one we took the summer off and came back with a summer show in January 2015. It was the 200th anniversary of the Battle of Waterloo.

Jo: So Apsley House was the perfect place to do it.

Anda: That’s when we had the equestrian idea. A lot of garments have come from riding, and you had identified that the shorter jacket shape was on the wane and the longer silhouette – which is by far the more flattering – is more exciting. A lot of that comes from equestrian and army heritage.

Jo: We were the first to do anything on the Battle of Waterloo before the official celebrations of remembrance started. We had a mixture of models and friends again, and we had the soldiers from the household cavalry at Knightsbridge barracks. There’s a fantastic picture of all the soldiers in their livery. They looked like they had just stepped out of the paintings on the wall.

Anda: Most of the challenge with Apsley House was the same as the others – convincing people that we weren’t going to damage anything. They get a lot of requests by brands to do things and because it’s their family home they’ll say no. This one, because the current Duke of Wellington is a Cleverley customer and a very well dressed man, he appreciated it and allowed us to go ahead with what turned out to be our final exhibition.

Anda: I think the lasting impact of these exhibitions was to help give a fresher look and feel to bespoke. It proved that we can put on a world-class show with world-class production values and world-class men and models. That we’re not just here in our corner but actually we know what goes on and if we choose to take part we can do something first-rate. And if we don’t choose to take part it’s not because we can’t.

Jo: It helped to remind people and make them look at Savile Row as a viable alternative to designer clothes.