MORE THAN A FEELING:
THE LATE AA GILL ON
THE TIMELESS APPEAL
OF TAILOR-MADE 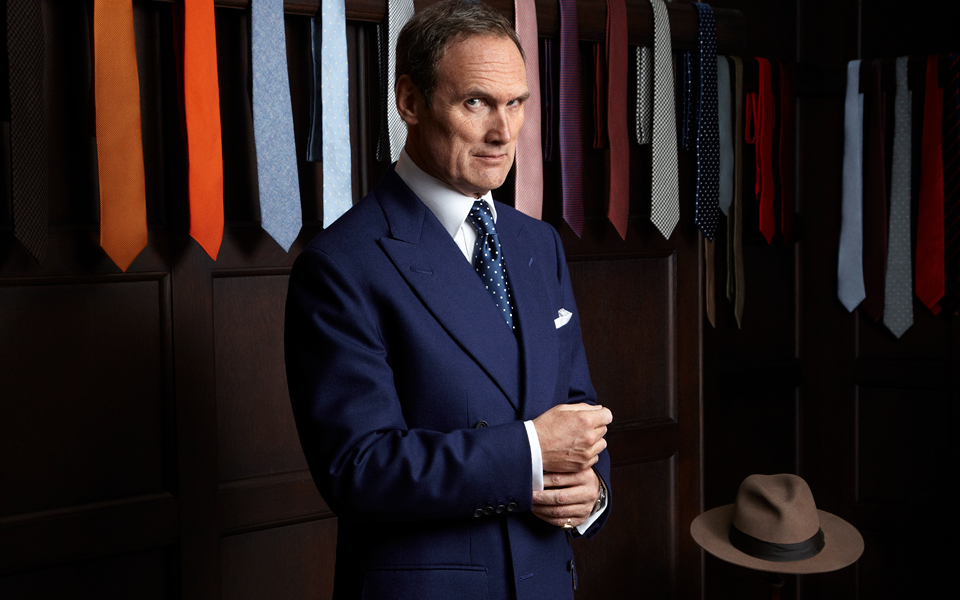 There’s a tailor I know who’s never worn off-the-peg. His dad was a tailor: ‘He made all my school clothes, at the weekends. He made the suit for my first job interview. The boss was impressed – he was a tailor. He took me on as an apprentice and I’d practice by making my own clothes. So I’ve never bought off-the-rack. What does it feel like?’ And, apart from being an infuriatingly smug question to be asked by your tailor, it is straight to the point. He didn’t ask, ‘What does it look like?’ because, obviously, he knows what off-the-peg looks like – we all know what off-the-peg looks like. It looks like the rest of us. But still, we shuffle out of the insubstantial changing room (is there any humanly contrived space without a lock on the door that is more deeply and fundamentally anti-pathetic and reviled by men than a do-it-yourself changing room?). We shuffle out with concertina trousers, and a jacket that’s going to need a bit of taking in and the sleeves looking at, and say, ‘How do I look?’ It is essentially a rhetorical enquiry – we know what we look like. We can see it in the interrogatory neon-lit mirror. We look like all men look when they come out of the dystopian fashion Tardis of a changing room. A bespoke tailor in his fitting room – which is as far from a changing room as a cardboard takeaway mug is from a porcelain tea cup: they may contain the same thing but, my, the difference in taste – the tailor won’t ask you how you look or if you like your look, or his look. He asks how it feels. Because feeling is the point of bespoke. It is all about the feeling.

When incredulous loaded men say, ‘Is handmade really five times better than a very good high-street whistle? Really and truly? Because, frankly, we can’t necessarily see the difference, and it’s not like a Ferrari and a Morris Minor,’ they’re making a fair point – you can’t see the difference. Not much. And, of course, that is part of the point. Bespoke tailors rarely recommend the sort of panache that gets you whistled at in the street, or has other men green with envy. The point of bespoke is not the suit but the chap in the suit. Again, this is not how it looks on you but how you feel in it. There is something exceptional about putting on a jacket that has been created purely and solely for you, and will only ever be worn by you. There is a feeling of intensely quiet pleasure in the way it hugs your shoulder, like a brotherly hand, the captain’s hand on your back. It is not just a good and comfortable fit, but a sense of confidence and security. As for the look, you put it on and never think about it again. A bespoke suit is sort of elegant armour. It offers a sense of protection – you walk into a room and feel like the Iron Man, without the tights or silly hat.

Over the past years, Anda Rowland from Anderson & Sheppard – where I have a Saturday job – along with Jo Levin and The Wool Council, have been trying to make pictures for men’s fashion week that show you what bespoke feels like. She’s involved all the great historic tailors of Savile Row. But there was and is an innate problem with this: the vernacular, the essence of fashion, images, are all about what clothes look like and how you might look in them if you were David Gandy or Mahatma Gandhi; these pictures had to intimate a little of how wearing bespoke feels. So they went to places that implied purpose and had implicit emotions: Lord’s for that captain’s hand on your shoulder, the feeling of ‘Play up! Play up! And play the game!’ And Apsley House, given by a grateful nation to the Duke of Wellington, for the explicit sense of coolness under pressure, decision making, a patrician insouciance.

But the one I liked best was the War Rooms, where Churchill stayed during The Blitz while organising the decreasing fortunes and lengthening odds of the war effort. Not quite the same as Wellington’s divvying-up power on French fields at the expense of lines of dead Irishmen, or a London drawing room, or the phony conflict of cricket. The feeling here was of a taciturn, dogged grit and bloody-minded resistance. You could feel it in the Map Room – an aura of defiance. You wouldn’t want to be in this room dressed in tight, short, ankle-flashing jeans with a Norman Wisdom jacket. You could see the men fill out their suits, the English worsted stroking their shoulders, the cloth whispering, ‘You can do this. Ask not what your clothes say about you, but just get on and do something really important, really necessary.’ The thing with bespoke English tailoring is not that people meet you and notice your taste and the cut of your jib: they see you as someone who is completely confident, up for the longest day.

Adrian Anthony ‘A.A. Gill’ (1954-2016), British writer and critic, was the author of many books and was well known for his food and travel writing. He wrote for Vanity Fair and Esquire, and was The Sunday Times’ restaurant and television critic. He was a regular customer of Savile Row’s Anderson & Sheppard, where he was a founding member of the Haberdashery shop team and worked with them to develop shop staples such as the range of trousers and the haberdashery jackets – many of which are pieces named in his honour. Gill participated in the Lord’s Cricket Ground and Cabinet War Rooms presentations in The English Gentleman series. His son Alasdair took part in the Spencer House presentation.